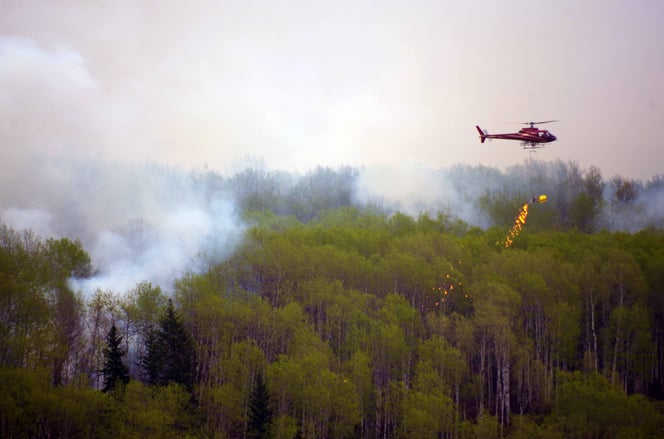 Firefighters intend to use aerial ignition – just one of the many tools we have to fight wildfires - on the west side of the fire, south of the Hotchkiss River around midday today.

Aerial ignition is used to remove potential fuel between the perimeter of the wildfire and a fireguard - such as a road, river, dozer guard or lake. The first priority with any planned burning is safety – the safety of firefighters, public, equipment, and adjacent values at risk.

In addition to safety, we analyze topography, fuel load, and the potential for fire behaviour. Most often, wind speed and direction are influential factors, but relative humidity, and temperatures are also key in determining when and where aerial ignition takes place. All these considerations are used to create a strategic plan for aerial ignition operations.

The overall objectives for the operation are to enhance community safety and the effectiveness of our firefighting efforts by removing unburned vegetation between the guard and the wildfire.

Due to the continued wildfire danger from dry grass and weather indicators, the Fire Ban and OHV Restriction remains in effect for the Peace River Forest Area and most of northern Alberta.

The Fire Ban and Off-Highway Vehicle Restriction will remain in effect until conditions improve.

Many nearby municipalities have advisories, restrictions or firebans in place.  Please check www.albertafirebans.ca for more information and to view a map of the fireban/OHV restriction boundaries.

Numerous resources including crews, aircraft and heavy equipment groups have been placed throughout the area on standby and at the ready to quickly action any new wildfire starts.

There have been 75 wildfires in the Peace River Forest Area this fire season, and each of these wildfires has now been extinguished with the exception of three.

This lightning caused fire remains out of control at 54,255 hectares in size in the Manning/Notikewin area

PWF 070 remains classified as under control at 251 hectares in size west of Keg River.  The fire has been completely surrounded by dozer guard and the perimeter has not changed since Monday of last week.  Firefighters and aircraft are continuing to work towards extinguishing this fire and do not expect the perimeter to grow beyond the current boundaries.

PWF 074 was discovered on the eastern side of the Peace River by Notikewin Provincial Park.  It is now being held at 0.30 hectares in size.  Firefighters and aircraft are working to control this fire.

For updates on this fire, please visit http://srd.web.alberta.ca/high-level-area-update

For your safety and the safety of the numerous firefighters working to contain these wildfires, please stay obey the access restrictions and stay out of the area.

For information on the wildfire situation across the province of Alberta, visit: wildfire.alberta.ca.

Today’s forecast (Sunday) has maximum temperatures of 17 degrees Celsius, relative humidity levels of 30-35%, and winds from the west at 15 km/hr. Some light rain may pass through the area.  A drying trend will continue with gradual warming into the start of the week.

The County of Northern Lights has issued a number of evacuation alerts for the area.  For more information and updates on their status, download the Alberta Emergency Alert app, listen to the local radio station or visit the County of Northern Lights website: www.countyofnorthernlights.com or the County’s facebook page www.facebook.com/countyofnorthernlights.
Town of Manning/County of Northern Lights:
The evacuation alert for the Town of Manning including surround County of Northern Lights residents north of township road 910 (Northstar road) and south of township road 922 (Notikewin road) and all those west of range road 231 remains in effect.
Potentially affected residents must begin preparations to evacuate on short notice (fueling vehicles, gathering documents, preparing food and water and animal safety, etc.)
In the event that the evacuation order is given, the Emergency Coordination Centre will instruct you on an evacuation route and reception centre.
Please continue to monitor the local media stations, the County of Northern Lights website (www.countyofnorthernlights.com) and the Town of Manning Facebook page for updates.
Paddle Prairie Metis Settlement:
Paddle Prairie remains evacuated.  Evacuees should register at the reception centre located at the Grande Prairie Regional College.  The reception centre phone number is 780-567-5587.
For information on the Paddle Prairie Metis Settlement evacuation, please visit their Facebook page.

The Chinchaga Road continues to be closed to the public. It can be accessed by commercial traffic but there are danger trees along the route so those using the road must stop at the checkpoints, drive 50 km/hr and drive straight through the area affected by the fire.  No stopping is permitted while traversing the fire area.

Highway 35 is open for travel between Township Road 1022 and 5 km south of High Level. This portion requires a police escort. Expect major delays in the area. There still is no access to Paddle prairie at this time due to the wildfire.

For information on road closures and other access related hazards, visit Alberta 511 or download the free Alberta 511 app.

Smoke may be drifting into the area for the foreseeable future. Anyone with health concerns should check with Alberta Health Services or call 811 for 24/7 health advice from Alberta Health Link. For a smoke forecast map, visit Wildfire Smoke Forecasts for Western Canada.

All fire permits have been suspended, effective on May 16 at 6 pm.  No fire permits will be issued until the fire danger conditions improve.

Please call the Peace River Forest Area office at 780-624-6190 if you have any questions about fire permits.

DO YOUR PART TO PREVENT WILDFIRES

Please continue to respect the fire ban and quad restriction currently in effect.

You can protect your home from wildfire