The forecast today calls for a temperature of 28 degrees and 30 percent humidity tomorrow. A cold front will be moving into Alberta bringing instability and a high chance of thunderstorms this afternoon. Wind shifts can be expected with sustained speeds of 20 to 25 kilometres per hour with gusts up to 40. With the current drought conditions, the lightning associated with this weather system could easily ignite new wildfires.

Please report wildfires immediately by calling 310-FIRE or #FIRE on your cell phone. 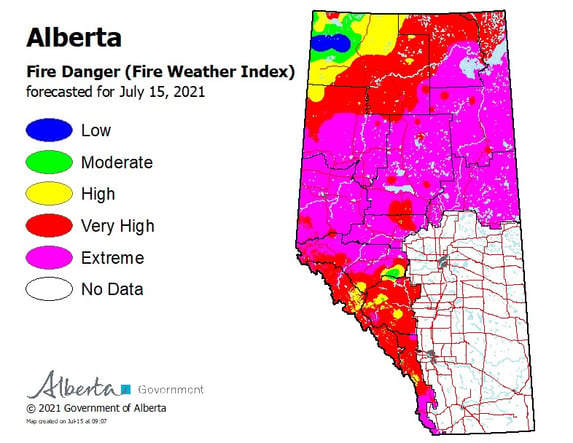 As of 12:30 p.m., there were 8 wildfires burning in the Lac La Biche Forest Area. In total, 2 fires are out of control, 2 are being held and 4 are under control.

Fire LWF154 was discovered July 12 and was lightning caused. It continues to be out of control at is now estimated at 125 hectares. The fire is in proximity to the railway, electrical power lines and industry infrastructure. It is also approximately 1.6 kilometres west of Highway 881. A fire break, known as a dozer guard, has been created along the eastern flank, that is, between the fire and the highway. Heavy machinery is now working on the western flank of the fire. Presently the highway is not closed, but there is signage indicating that smoke may impact visibility. As well, the fire is estimated to be 15 kilometres to the northwest of Janvier. At this time the community is not threatened. Today there are 48 firefighters, 5 management staff, 5 pieces of heavy equipment, 4 helicopters and air tankers working to contain the fire.

Fire LWF152 was discovered July 12 and was lightning caused. It continues to be out of control at 80 hectares. It is located approximately less than a kilometre west of Highway 63 in the House River area. Although the fire has not reached the highway, smoke could impact the area. Today there are 32 firefighters, 4 management staff, 3 pieces of heavy equipment, 2 helicopters, and air tankers working to contain the fire. A fire break, known as a dozer guard, has been created around 50 percent of the fire, with the objective of attaining 100 percent by the end of the day today.

Fire LWF156 and LWF157 were discovered today, and their causes are under investigation. LWF156 is under control at 0.01 hectare and LWF157 is being held at 0.01 hectare. Both are east of Highway 63 in the House River area. Four firefighters and 1 helicopter have been assigned to each fire.

Fire LWF147 was discovered July 11 and was lightning caused. It is being held at 5.5 hectares. It is located approximately 2 kilometres west of Highway 63 in the Wandering River area. Today there are 8 firefighters, 1 management staff and 1 helicopter working to suppress the fire.

Fires LWF134 and LWF146 are both lightning caused and under control. They are 0.01 hectare and 3 hectares, respectively. LWF133 and LWF146 have 4 firefighters each patrolling and monitoring for hotspots today.

Fire LWF129 was discovered July 2 and was lightning caused. It is under control at 372 hectares. As the fire is under control, no resources have been assigned to it today. Wildfire resources are allocated according to priorities such as risk to human life, communities, and infrastructure. This fire will be reassessed in coming days.

To view the wildfires on a map, download the new AB Wildfire Status App.

A FIRE RESTRICTION remains in place for the Lac La Biche Forest Area due to hot and dry conditions, which are increasing the fire danger.

Remember to check the hot spots on your Off-Highway Vehicle (OHV) and remove debris before and after use.

Never leave a campfire unattended. Soak it, stir it and soak it again until cool to the touch to ensure it is extinguished. If you see a wildfire, report it immediately by calling 310-FIRE.

The fire restriction will remain in effect until conditions improve.

As of 10 a.m. July 15, 2021 there were 89 active wildfires in the Forest Protection Area of Alberta (FPA). Fifteen of these wildfires are out of control, 29 are being held, 44 are under control, and 1 has been turned over to the responsible party. 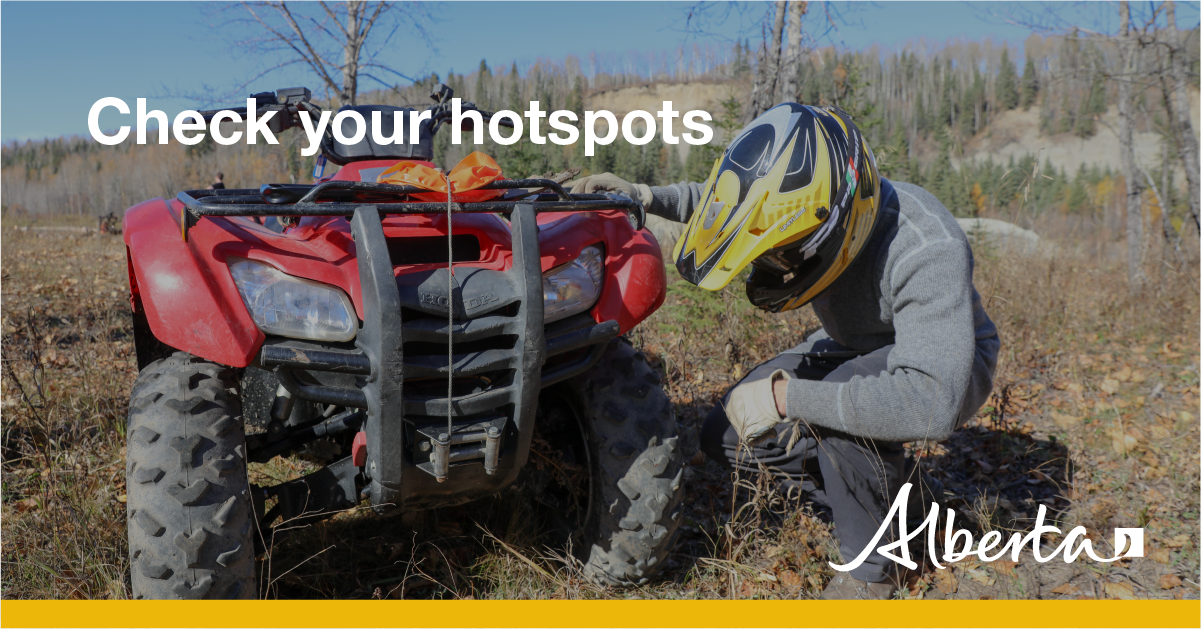 If you are operating an off-highway vehicle, remember to stop often and check your hotspots.

An off-highway vehicle exhaust can reach temperatures of over 200 Celsius, causing debris caught near the exhaust to become superheated. This debris can potentially start a wildfire when it falls to the ground.

Before you ride, clean any debris that has built up near the exhaust and muffler, under the seat, in wheel wells and around the engine.

Download the new Alberta Wildfire app today and get access to accurate, real-time information on wildfires in your area. You can also find information on fire advisories, restrictions and  bans across the province and much more.

Available for Apple and Android.

We urge everyone to use caution when working and recreating outdoors. Never leave your campfire unattended. Before leaving, be sure to soak your campfire, stir it and soak it again.

For more information between the hours of 8 a.m. and 8 p.m., please contact:

Join the conversation on