The Chuckegg and Jackpot Creek wildfires remain out of control.
Fire Ban and Off-Highway Vehicle Restriction continues.
The fire danger remains high as the area needs a significant and widespread rainfall for the danger to be reduced.
Report wildfires by calling 310-FIRE(3473). 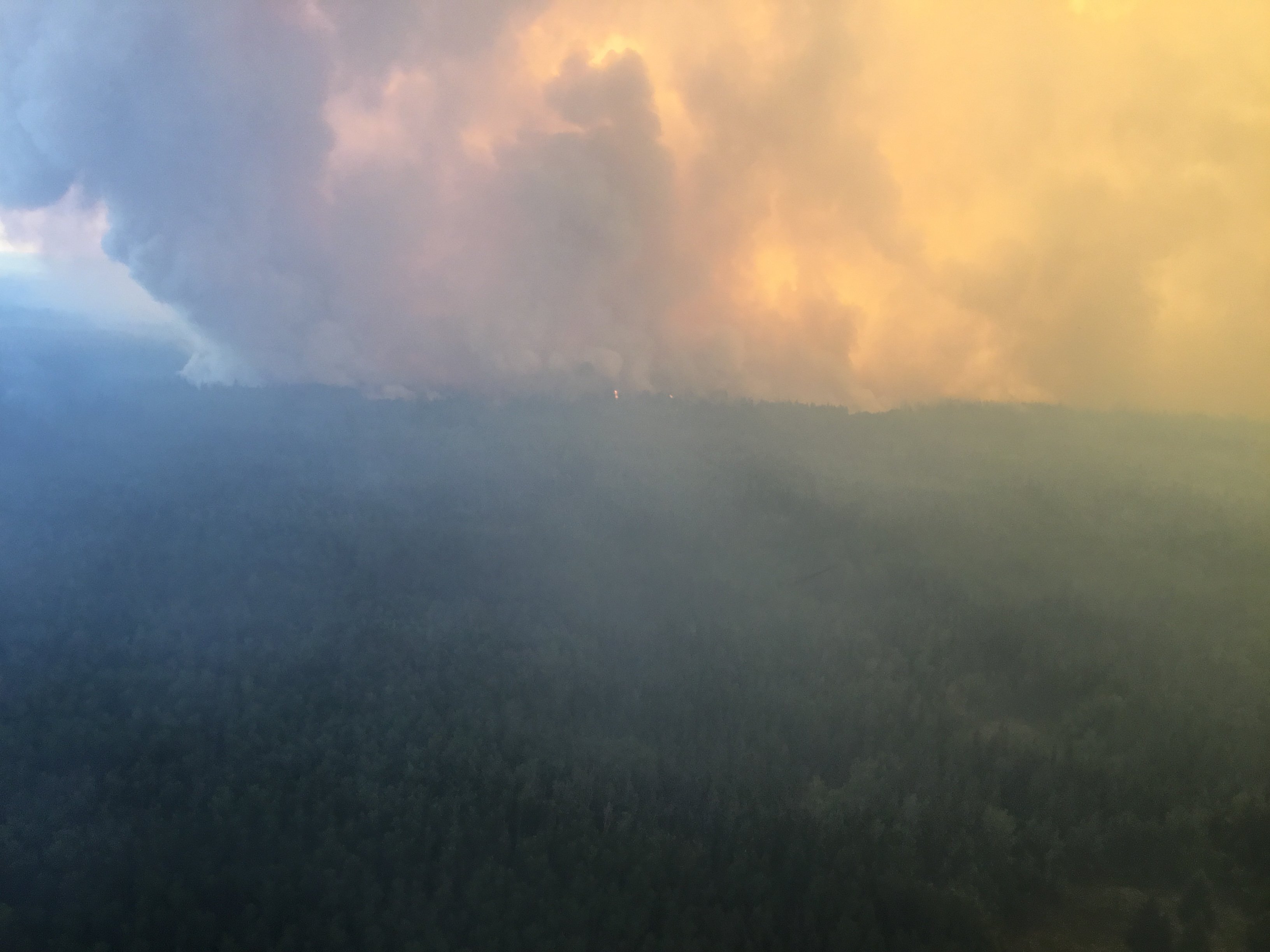 Click here for a map of all fire locations and their status within the High Level Forest Area.

A Fire Ban and Off-Highway Vehicle Restriction is in effect for the High Level Forest Area due to dry conditions and no significant rainfall in the forecast. The ban and restriction will remain in effect until conditions improve. All fire permits are suspended and no new fire permits will be issued.

Today was a busy day on the fireline.  We reached crossover conditions, where humidity levels are lower than temperature, by noon today meaning fire activity picked up quite early.  During most of the early afternoon smoke was visible across the fire as winds and dry conditions caused flare ups and burning of green trees within the fire perimeter.

This afternoon, winds out of the southwest caused spot fires ahead of the fireguard on the portion of the fire just west of the Peace River and northeast of the ferry.  The fire is being pushed in a northeast direction.  Smoke is visible in Beaver First Nation, La Crete and surrounding communities.  Crews were removed from this area due to safety concerns and went to work elsewhere on the wildfire.  The planned ignition for this area did not happen at noon today due to switching winds.  A back burn is planned for the east side tonight, if conditions are favorable.

Due to the very low humidity levels, hot temperatures, and gusty winds, we anticipate aggressive fire behavior for a couple more hours.

Looking ahead, we are expecting an overnight temperature of 15 degrees with relative humidity reaching 50-60% and little wind.  This is not a great humidity level for recovery (last night was 80%), but it will help settle the fire down.  We are expecting a weak inversion in the morning, meaning the smoke will likely lift early and the fire will pick up sooner than later.

Tomorrow is going to be an unstable weather day, which is not favorable for the wildfire.  With a cold front sitting on the Alberta/BC border around noon, we can expect winds over the fire for the peak burning period.  The forecast for tomorrow is for a high of 30 degrees, humidity of 25% and winds S/SE 20 gusting 35 km/hr switching to SW 15-20 km/hr in the evening.  There is a chance of thundershowers as well.

The wildfire danger level is extreme for tomorrow, given the weather and the forest conditions.

The forecast for Tuesday is for cooler temperature and a chance of showers.  Hopefully Wednesday and Thursday will also be more humid.

Please be very careful in the forest tomorrow.  If you see smoke or fire outside of the fire perimeter please call 310-FIRE immediately.

Challenging conditions today, as the fire expanded on the east and northeast flanks. Dozer guard on the west side of the northern excursion is still holding, and being reinforced with helicopter bucketing and airtankers. Crews working the southwest portion are progressing well; the perimeter on that side held. Heavy equipment was unable to breach the Hay River in the southeast so dozers will have to cross in the north and cross the fire to begin guard in the southeast corner.

At 8:00 a.m. Friday, June 14th, 2019 the Joint Emergency Coordination Centre for the Town of Manning and the County of Northern Lights RESCINDS the Evacuation Alert Status for the following boundaries:

Evacuation Alert has been lifted for:

More information on the Alert Status being lifted can be found on the County of Northern Lights webpage.

The Town of High Level, Mackenzie County and Dene Tha have lifted the eight-hour evacuation alert. However, stay prepared and stay informed. All residents of the area should continue to check the following links and listen to local radio for updates.

Alberta Transportation has reopened Highway 35 south of High Level with the aid of a police escort to ensure travelers safety; expect delays. Highway 697 east of Highway 35 to the La Crete Ferry remains closed. The La Crete Ferry is also closed. To stay informed on all road closure info visit the Alberta Transportation website or download the mobile app.